Abstract
The origin of electrical resistance at the interface between the positive electrode and solid electrolyte of an all-solid-state Li battery has not been fully determined. It is well known that the interface resistance increases when the electrode surface is exposed to air. However, an effective method of reducing this resistance has not been developed. This report demonstrates that drastic reduction of the resistance is achievable by annealing the entire battery cell. Exposing the LiCoO2 positive electrode surface to H2O vapor increases the resistance by more than 10 times (to greater than 136 Ω cm2). The magnitude can be reduced to the initial value (10.3 Ω cm2) by annealing the sample in a battery form. First-principles calculations reveal that the protons incorporated into the LiCoO2 structure are spontaneously deintercalated during annealing to restore the low-resistance interface. These results provide fundamental insights into the fabrication of high-performance all-solid-state Li batteries. 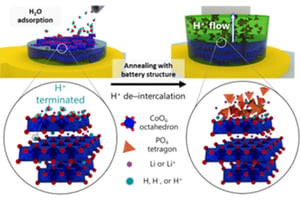