TOR complex 1 (TORC1) is an evolutionarily-conserved protein kinase that controls cell growth and metabolism in response to nutrients, particularly amino acids. In mammals, several amino acid sensors have been identified that converge on the multi-layered machinery regulating Rag GTPases to trigger TORC1 activation; however, these sensors are not conserved in many other organisms including yeast. Previously, we reported that glutamine activates yeast TORC1 via a Gtr (Rag ortholog)-independent mechanism involving the vacuolar protein Pib2, although the identity of the supposed glutamine sensor and the exact TORC1 activation mechanism remain unclear. In this study, we successfully reconstituted glutamine-responsive TORC1 activation in vitro using only purified Pib2 and TORC1. In addition, we found that glutamine specifically induced a change in the folding state of Pib2. These findings indicate that Pib2 is a glutamine sensor that directly activates TORC1, providing a new model for the metabolic control of cells. 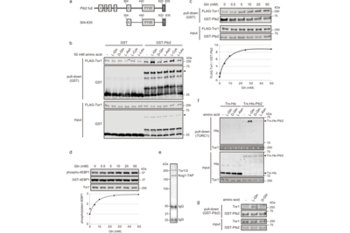