For the application of a ferroelectric thin film to optical and electric devices, it is important to align its ferroelectric polarization parallel or perpendicular to the film surface. In this context, an effective method to characterize the polarization directions in the whole area of devices is needed. Here, we report an alternative method to determine a polarization vector in three dimensions using an emission of terahertz waves. The target material is an organic hydrogen-bonded molecular ferroelectric 2-methylbenzimidazole (MBI). By the irradiation of a femtosecond laser pulse on a bulk single-crystal thin film of MBI, we observe the emission of the terahertz waves originating from the polarization modulation of infrared-active phonons via the impulsive stimulated Raman-scattering mechanism. By measuring the terahertz electric field parallel to the ferroelectric polarization with rotating the single-crystal film around two independent axes, we succeed in determining the polarization vector in three dimensions, the direction of which is tilted by 45° normal to the film surface and substrate. This method can be a powerful tool to characterize directions of ferroelectric polarizations in any kinds of thin-film samples. 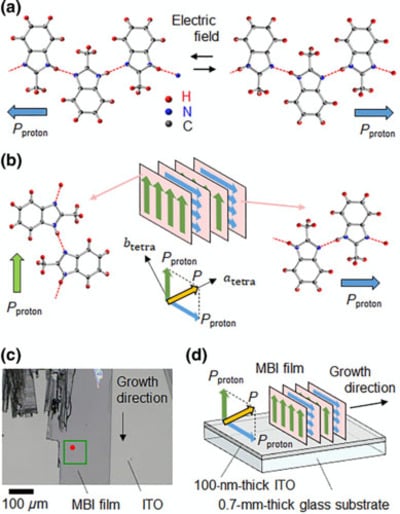