Abstract
Hydrodynamic motion can generate a flux of electron-spin’s angular momentum via the coupling between fluid rotation and electron spins. Such hydrodynamic generation, called spin hydrodynamic generation (SHDG), has recently attracted attention in a wide range of fields, especially in spintronics. Spintronics deals with spin-mediated interconversion taking place on a micro or nano scale because of the spin-diffusion length scale. To be fully incorporated into the interconversion, SHDG physics should also be established in such a minute scale, where most fluids exhibit a laminar flow. Here, we report electric voltage generation due to the SHDG in a laminar flow of a liquid-metal mercury. The experimental results show a scaling rule unique to the laminar-flow SHDG. Furthermore, its energy conversion efficiency turns out to be about 105 greater than of the turbulent one. Our findings reveal that the laminar-flow SHDG is suitable to downsizing and to extend the coverage of fluid spintronics. 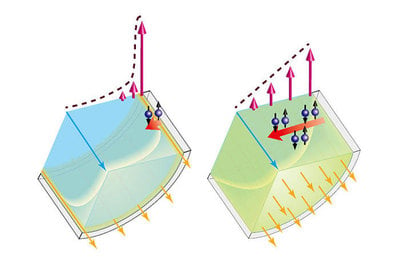