Abstract
We demonstrate sub-micrometer processing of two kinds of thin films, polymethyl methacrylate (PMMA) and metal nano-particle resist, by focusing high-order harmonics of near-IR femtosecond laser pulses in the extreme ultraviolet (XUV) wavelength region (27.2–34.3 nm) on the thin film samples using an ellipsoidal focusing mirror. The ablation threshold fluences for the PMMA sample and the metal nano-particle resist per XUV pulse obtained by the accumulation of 200 XUV pulses were determined to be 0.42mJ/cm2  and 0.17mJ/cm2, respectively. The diameters (FWHM) of a hole created by the ablation on the PMMA film at the focus were 0.67 µm and 0.44 µm along the horizontal direction and the vertical direction, respectively. The fluence dependence of the Raman microscope spectra of the processed holes on the PMMA sample showed that the chemical modification, in which C=C double bonds are formed associated with the scission of the PMMA polymer chains, is achieved by the irradiation of the XUV pulses. 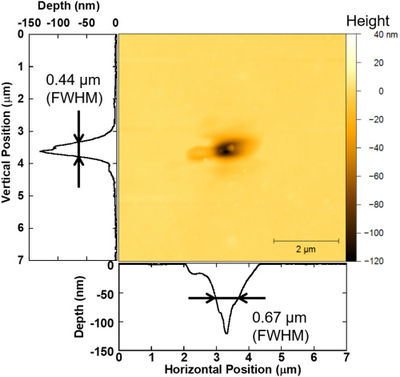