Abstract
Serine hydroxymethyltransferase (SHMT) is an enzyme that catalyzes the reaction that converts serine to glycine. It plays an important role in one-carbon metabolism. Recently, SHMT has been shown to be associated with various diseases. Therefore, SHMT has attracted attention as a biomarker and drug target. However, the development of molecular probes responsive to SHMT has not yet been realized. This is because SHMT catalyzes an essential yet simple reaction; thus, the substrates that can be accepted into the active site of SHMT are limited. Here, we focus on the SHMT-catalyzed retro-aldol reaction rather than the canonical serine–glycine conversion and succeed in developing fluorescent and F NMR molecular probes. Taking advantage of the facile and direct detection of SHMT, the developed fluorescent probe is used in the high-throughput screening for human SHMT inhibitors, and two hit compounds are obtained. 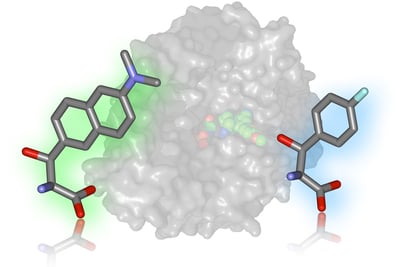